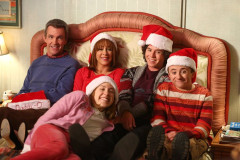 Enjoy holiday quotes from Christmas episodes of The Middle.

Quote from Brick in The Christmas Wall

Brick: Hey, Dad, I've been working on the family Christmas letter, and I want to run it by you.
Mike: Uh, not a good time, Brick. I just drove all the way to Jasper and then to Bedford 'cause they put a tree on hold for me, which apparently means "sell it to whoever walks in and asks for one."
Brick: You know, if you can make that a bit more interesting, I think I can squeeze it in this baby. Here's what I got so far. "Dear friends, merry Christmas 2014. What a year. Mom doesn't wear pants anymore. She's got an unsightly bruise on her hip that's been there since July. She says if it doesn't go away in a week, she'll go to the doctor. Finances weigh heavy on our minds. The sink fell through the counter last month, and now we wash dishes in the shower. Axl's football career appears to be over, as he dropped the ball... both literally and figuratively." I'm very proud of that part.
Mike: Yeah.
Brick: "Mom and Dad stay up late worried about Sue doing something with Darrin called 'losing it.'"
Mike: Whoa! Brick, you can't say any of that stuff.
Brick: Why not? It's all true.
Mike: Yeah, well, that's exactly why. Christmas letters are just for the good things that happened in the last year.
Brick: Oh. Well, that's gonna be a lot harder. And shorter.
Mike: [chuckles] Yeah.

Quote from Frankie in The Christmas Wall

Frankie: Hey, where you going? And what's with the hat?
Axl: If you must know, it's part of our new business venture... "Tree Wise Men," a subsidiary of Boss Co. Enterprises. We're getting paid to put up people's Christmas lights and decorations. It's the season to get rich.
Frankie: Well, we have a tree right here, and as soon as it gets assembled, we are decorating it as a family.
Axl: Oh, but this is the only chance I get to hang out with my friends. Now that I'm in college, which you guys insisted on, I never get to see them anymore.
Frankie: Okay, but as soon as you get back, we're making a trip to the Frugal Hoosier. I'm filling two cars with stuff, and you're gonna be my Christmas helper.
Axl: Ugh. Fine. But I'm gonna need 10 bucks for my time.
Frankie: Oh, are we settling up? Because I put a bill together for all the things I've done for you, and it's a billion dollars.

Quote from Frankie in The Christmas Miracle

Frankie: Well, at least someone has a passion for the holiday. The kids are just so blah.
Mike: So, we start later in the day. Who cares?
Frankie: Don't you get it? Now that they're not little anymore, the magic is gone. Remember when they used to wake us up at 5:00 a.m. and jump on our bed?
Mike: I remember you cursing into your pillow.
Frankie: "Damn it" isn't a real curse.
Mike: You didn't say "damn it." You said...
Frankie: The point is, once you made me get up, I just loved how they couldn't wait to open their presents. And now all they want are gift cards.
Mike: I remember you cursing about having to go out and shop...
Frankie: The holidays are stressful! That doesn't mean you don't like 'em!

Quote from Axl in A Simple Christmas

Axl: Is that true? Are you weenying out on getting us presents?
Mike: Calm down. Nobody's weenying out of anything. There'll be presents, just maybe not so many.
Sue: All 'cause of an orange?
Brick: What's the orange?
Axl: You remember. From our stockings. That stupid orange from when Mom used to live on the prairie and all she got for Christmas was an orange.
Frankie: Uh, it wasn't frontier days, it's your great-grandmother during the Depression. How old do you think I am?
Axl: God, I don't know. I try not to think about you.

Quote from Brick in The Christmas Wall

Brick: We hit the jackpot today eight Christmas cards. The Kirkwoods wish us a happy holidays and... hold on. It's got a letter in it. It's all about their doings and goings-on. Jackson was made captain of the soccer team. Oh, Dale's ankle's better. Who's Dale, again?
Mike: Some guy I went to high school with.
Brick: And yet he thought he should share every detail of his life with you?
Frankie: Yeah, Brick. It's a Christmas letter. People update you on their lives. It's a way to keep in touch.
Brick: So we've gotten more of these?
Frankie: Yeah, I usually throw them out.
Brick: Why? They're fascinating. Emily's engaged! They like him!

Quote from Frankie in Christmas

Frankie: Oh, my God. Mike. The Christmas village? I love setting up the Christmas village. All right, this is chaos. This guy with the newspaper is supposed to go in front of the bakery. You've got him lurking around the school like he's some kind of pedophile. Look, you've got the carolers on the train tracks, like that's gonna end well.
Mike: Did you want my help or not?
Frankie: Well, yes, but I can't leave the house for a second to go to work or practice without you churning out some other Christmas tradition. I just wanted you to do the crummy stuff. You know, go to the grocery, stand in line at the post office for the Christmas stamps. I don't want you hogging up all the fun stuff.
Mike: How am I supposed to know what you think is fun?
Frankie: Well, you know how there's songs about decorating a tree or building a snowman? That's how you know. If it's in a song, don't do it.
Mike: So, no chestnuts roasting on an open fire.
Frankie: No.
Mike: No dashing through the snow.
Frankie: No, that's all out.

Quote from Frankie in A Simple Christmas

Mike: We're doing a little thinking about Christmas. It seems that we don't always appreciate it the way we should.
Sue: Oh, no, we appreciate it. Mm, we totally appreciate it.
Frankie: Do you? Exhibit A. Does anybody recognize that?
Mike: We'll give you a hint. One of you had to have it just last year.
Axl: Well, it's lame, so I'll go with Sue.
Mike: Ooh! Sorry. We were looking for "Axl." The correct answer is "Axl."
Sue: And it's not even opened. Wow. That is unappreciative.
Frankie: Huh. That's funny you should say that, Sue. Or should I say... Exhibit B.
Sue: Oh! Thank you! I've been looking for this.
Frankie: Been in the middle of the pool table all year, right next to... Exhibit C!
Axl: A word-a-day calendar? Well, you know that's not mine.
Frankie: Brick stopped using it on January 2nd. And coincidentally, the word is "irresponsible."

Quote from Frankie in The Christmas Tree

Frankie: Ooh, where did you get the new book light?
Brick: From school. This is the prize you get for selling 20 rolls of wrapping paper.
Frankie: You sold 20 rolls of wrapping paper?
Brick: That I did not do, but I'm not worried 'cause they said I don't need to give them any money till January.
Frankie: Wait a minute. The snowman wrapping paper in my closet that I convinced myself I bought in February 'cause I wish I was more organized than I actually am?
Brick: That would be it.
Frankie: Brick, I wrapped all our presents in that.
Brick: Oh, that'll be $97, and if you wouldn't mind saying your sales rep was courteous and professional.
Frankie: Yeah, there's no way I'm paying $97 for wrapping paper. You're just gonna have to unwrap it and get it all back on the roll.
Brick: But won't I see my presents?
Frankie: Yeah, they're not that great.

Quote from Brick in Christmas

Mike: Hey buddy, we need to talk. [pulls Brick out from under the Christmas tree] What's going on? Mom and I are worried about you.
Brick: I'm just a little melancholy. [whispers] Melancholy.
Mike: When did all this start?
Brick: [normal voice] You know that Santa PEZ dispenser I got two years ago where the candy comes out of his beard? I just started thinking about how I had it and then one day it was just... gone. And then I started thinking that someday you'll be gone... And I'll be gone, and we'll all be gone.
Mike: Well, sure. Everybody worries about death. It's terrifying. But you know what we do? We shove it out of our minds. That's why we have books and candy and water parks and TV. It's all just a big old distraction from death. So all better?
Brick: Okay. [whispers] Okay.
Frankie: [v.o.] And then because he thought he was on a roll, Mike got greedy.
Mike: Oh, and you know, if you keep on whispering to yourself... Santa's not gonna bring you any presents.

Quote from Axl in The Christmas Wall

Darrin: Rudolph always made me sad, you know? They wouldn't ever let him play any reindeer games. That's B.S., man.
Sean: Hey, if you're gonna feel bad for anyone in the Rudolph special, it's the Island of Misfit Toys. Train with the square wheels, that cowboy riding an ostrich, King Moonracer. Man, that place is depressing.
Axl: I agree with you on the depressing, but you're wrong about King Moonracer. He was not one of the misfit toys.
Sean: Yeah, he was. He was on the Island of Misfit Toys. Therefore, he's a toy.
Axl: The lion with the wings? He was the leader of the misfit toys... he wasn't one of them.
Sean: So you're telling me King Moonracer, this guy here, would willingly hang out with a bunch of unwanted toys when he didn't have to?
Darrin: Good point.
Axl: Think about the end of the special, when Santa delivers the misfit toys. Who's not in the bag? That's right... King Moonracer. Booyah!
Darrin: I guess that settles it.
Sean: Yeah, but they only show, like, five toys being dropped of. Just 'cause King Moonracer isn't one of them doesn't mean he's not a toy. I'm pretty sure that more than five toys get delivered on Christmas.
Axl: What is your problem, man? Why do you hate King Moonracer so much?
Sean: I don't hate him. He's one of my favorite toys.
Axl: Stop calling him a toy!