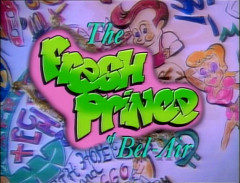 Philip doesn't seem as excited as Vivian to be invited back to the 25th anniversary special of Soul Train.

Hilary: I can't stand this. Everyone has a date except me.
Will: What's the problem, Hil? I mean, come on. You're pretty, you're fun, you're intelli- Vision.
Hilary: Well, that's exactly the problem. I'm a celebrity and men are intimidated by me. I'm a beautiful woman trapped in an even more beautiful woman's body.

Will: Hey, hey, hey. Come on, man, let me have it. What's the problem?
Philip: Will, do you know what I'd do if I even thought for one second that you were anywhere near my problem?
Will: No, what?
Philip: I'd build a fence to keep you away. One with barbed wire and maybe a sniper up on the roof to pick you off just in case you got over the fence. And given the slightest chance that he'd miss, there'd be two rottweilers guarding my problem.
Will: You don't want my help, do you? I'll go.

Hilary: Any big plans tonight, Carlton?
Carlton: I have a date.
Hilary: With whom?
Carlton: Same lady I see every Saturday night. Dr. Quinn, Medicine Woman.

Vivian: I was thinking about going to Soul Train by myself. Would you be my dance partner?
Will: Ooh. Uh, Aunt Viv, you know, I'd love to take you. You know, but this is Soul Train. I got to get my mack on, you know. Which is kind of difficult to do when you go there with somebody old. Oh, I mean... I mean... I mean... I mean that's kid talk, Aunt Viv. You know how kids talk. You know, bad means good. And stupid means great. And old means beautiful. You are so old. You are the oldest person I ever seen.
Vivian: We leave at 8.
Will: I will be ready.

Correct this quote
View more quotes from Will

[on tape:]
Don Cornelius: Welcome back. Now we're gonna play the Soul Train Scramble game. Let's meet today's couple. You are?
Vivian: Vivian Smith, Scorpio.
Philip: Oh, Philip Banks. Solid.
Don Cornelius: All right, you know the rules. If you can unscramble our mystery artist you win a lifetime supply of Afro Sheen. Okay? Ready? Go. [funk music plays]
[Philip writes out "Vivian, I love you and I always will. Marry me"]
Don Cornelius: I'm sorry, Phil, but that's wrong. The answer is James Brown.
Philip: No, my man, it's not wrong. See, foxy mama ever since I met you, I knew that the deal we had was righteous. And I know out of all the cats out there, I'm not the downest. It's just that... I want our gigs to groove together forever. Do you dig it?
Vivian: You're my main man.
Don Cornelius: Now, that's true love. Let's send them on their way with Marvin and Tammi and "You're All I Need."

Will: So, Uncle Phil, you proposed on Soul Train, huh? Where you all get married at, The Flip Wilson Show?
Ashley: I think it's so romantic.
Vivian: Soul Train's having a 25-year reunion and we've been named as one of the 10 most memorable couples.
Philip: Well, isn't that great?
Vivian: The whole family's invited.
Will: All right. Hey, let me tell y'all when I was growing up in Philly, Soul Train was the bomb. Hey, I still got my miniature Don Cornelius with the lifelike voice. [in deep voice] "You can bet your last money it's gonna be a stone gas, honey. And until next time, love, peace and..."
Vivian: Soul! [laughs]
Carlton: You played with a doll?
Will: Ain't- Ain't no doll, man, it's an action figure. Afro pick sold separately.

Don Cornelius: And let's reach all the way back to a personal favorite. Here's Marvin and Tammi's "You're All I Need."
Philip: You know, Vivian? From the night I first met you, I knew that the deal we had was righteous. Now, I may not be the downest cat out here. I just want our lives to groove together forever.
Vivian: You are still my main man.
Philip: You know, sweetheart, when we first danced together on Soul Train we had our whole lives to look forward to. I don't know, I guess it's a lot easier to look ahead than it is to look back. But as long as I'm with you, there is only now.

Vivian: What is this?
Will: Uncle Phil was feeling a little gun-shy about his grooves. I got Lamont to come over, give him some dance lessons.
Lamont: That's right, Philly Gilly. Now, lesson number two is shake your groove thing.
Geoffrey: If that's a groove, the Grand Canyon's a ditch.

Hilary: Geoffrey. If you weren't my butler and had a decent job would you ask me out or would you be too intimidated? Geoffrey.
Geoffrey: Sorry, I got caught up in the fantasy.
Hilary: About me?
Geoffrey: No, about that decent job. Tell me, do I have a desk?

Philip: Just got back from dropping Nicky off at his first sleepover party. I met some of the parents, I couldn't believe it. Most of them are only few years older than you kids.
Will: Didn't none of them kids look like me, did they, Uncle Phil? I was just checking, man, just checking.

Will: Carlton, what's wrong, man? Are you having a Maalox moment?
Carlton: I'm practicing for Soul Train. I understand there's some dancing involved.
Will: Two things, Carlton. One, that's not dancing. And two, I would appreciate it if you stayed away from the show.
Carlton: And why, pray tell, is that?
Will: Again, two things, Carlton. One, because you say stuff like "pray tell." And, two, you're gonna mess up my chances of being the new co-host.
Carlton: You're going to be the new co-host? Gee, I guess they forgot to fax me that press release.
Will: Well, let me break it down for you, Teeny Petito. Now, Soul Train has been looking for a new co-host. And so far, nobody's worked out.
Carlton: And they're going to give you the co-host job based on what? Your love of Don Cornelius dolls?
Will: It's not a doll, man, it's an action figure. And you got no business even being on the Soul Hyundai let alone the Soul Train. So stay away from the show so you don't embarrass me.

Philip: Look, Will, I'm not gonna have some platformed freak make a fool out of me.
Lamont: Whoa, you're talking about one of the original Solid Gold Dancers. I danced at Sam Cooke's funeral.
Philip: You're gonna be dancing at your own funeral if you don't get out of my house.
Lamont: Overgrown Isaac Hayes-looking fool.

Will: [in deep voice] Welcome to the Soul Train 25th Anniversary Special. I'm Don Cornelius. Before we get started, I'd like to say: Get that damn flashlight out of my face! [normal voice] You kill me, Don.
Carlton: Are you still playing with that doll?
Will: Action figure, action figure. Is that so hard to understand?
Carlton: Look, forget your stupid doll.
Will: Action figure.

Ashley: Hilary, sit down. I want you to take this test on your dateability.
Hilary: Please, Ashley, like some little quiz in Seventeen magazine has anything to do with my life.
Ashley: Come on, Hilary, it's just for fun.
Hilary: Okay, okay.
Ashley: All right. Question one. You're on a date and the guy tries to kiss you, what do you do?
Hilary: I don't have a date. Must you throw that in my face?

Correct this quote
Page 1 of 2