The Crows Have Eyes Page 1 of 2 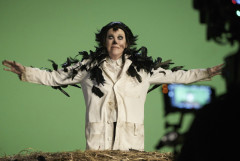 All the tales of Moira Rose's starring role in the psychological thriller "The Crows Have Eyes III."

Quote from Moira in The Crowening

Blair: There's a problem with the script?
Moira: Well, just a few character adjustments.
Blair: [laughs] I'm kidding. The script's a total dumpster fire, of course.
Moira: Hah! If the script were garbage, I don't believe we'd have signed on.
Blair: It's an apocalyptic fantasy about mutant crows. I think we all know what we're making here.
Moira: A timely allegory about prejudice.

Twyla: Oh, it's too bad you won't be there tonight. It would've been nice to cheer you on.
Jocelyn: Yeah, and my plus-one, Janet from the Elmdale Chronicle, would've really loved a quote.
Moira: Well, you might want to tell your friend Janet that there just may be a bombshell attendee after all.
Twyla: [gasps] Yay! A premiere! Oh, I don't know if I have anything fancy enough to wear.
Moira: Oh, my default is always formal, but I'm sure no one will bat a side-eye at black-tie casual. Oh, but do pack eye-drops! The film's first third is densely packed with exposition, and you won't want to blink.
Jocelyn: Are you sure it's okay that we haven't seen the first two movies?
Moira: Oh, it's actually best. A lot of this film blatantly contradicts what's been established in the first two.

Quote from Moira in Rooms by the Hour

Moira: Look what you've done! Look at it! Lying there, lifeless. Yet, in its eyes, I see darkness.
David: It's just a crow, Mrs. Mandrake.
Moira: Dr. Mandrake. And you must be kidding yourself if you think more are not coming. They always do. They're watching you, Gareth. The crows have eyes. And you better not look them in it.
David: Uh, it-it's just a flock of crows, Dr. Mandrake. What's the worst that can happen?
David: Oh, you'll see!
Moira: And it's not a flock, my dear boy. It's a murder. Yes, I said murder.

Quote from David in Rooms by the Hour

David: Sorry, um, this is just one big rip off of The Birds.
Moira: This is about crows! It's much more specific!
David: And the dialogue. "Look, they've taken Clara!" "Where are they carrying her to, Clara?" Are there two Claras?!
Moira: It's a common name.

Jocelyn: Well, I don't know, Moira, I'm no movie expert, but according to the early reviews, you may have a hit on your hands.
Moira: Reviews?
Twyla: Yeah. There was an article posted on the Crows account that you made us all follow. Come look!
Moira: Ornithology Today! Well, if anyone knows crows... "The Crows Have Eyes III is 'good fun.'" Well, that's hyperbolic. I mean, they already had "fun" [laughs] and now they've added "good."
Jocelyn: [laughs] Keep reading!
Moira: "The film showcases the emotional depth and intellectual capacity of our oft-maligned friend, the crow." We were resolute about not making an issues movie, but I'm glad they picked up on that.
Jocelyn: It mentions you, Moira.
Moira: It does? Where? My eyes are blurred. Oh, here it is. "Moira Rose, as Dr. Clara Mandrake, is delightfully unhinged." Do you know what they call this, gals? An understated rave.

Quote from Moira in Rooms by the Hour

Moira: What are the terms?
David: Ooh, it's filming in Bosnia! Um, in a city that I don't- I don't know the name of the city. I can't pronounce it. A lot of consonants.
Moira: I did not know that. But I've always loved shooting on location, it allows one to focus on the work.
David: Hmm, it's being released in Bosnia, Croatia, Herzegovina.
Moira: Before opening internationally!
David: You have to fly yourself there?
Moira: Mmm, that doesn't sound right.
David: Ooh, accommodation is covered.
Moira: Thank God!
David: You'll be put up with a local family.
Moira: Close to the set?
David: They're paying you scale. But it'll be in Baltic currency, do you want me to keep going?
Moira: No, read to yourself.
David: There's a death waiver?!
Moira: Oh. You can close the computer.
David: Yeah, but we haven't even gotten to the section on bird safety yet!

David: Okay, have you seen this yet? Some random news station just posted video of the premiere. It's been shared 32,000 times.
Moira: Well, all press is good press, right?
David: You might wanna watch it first.
Reporter: [on video] Tonight, a murder of wild crows attacked would-be audience members who had come to see a movie about a crow attack. We must warn you, the following content is pretty graphic.
Alexis: Okay, they weren't "wild" crows. They were supposed to be trained.
Moira: Trained! Some of them were painted seagulls. This is not good, Alexis!

Moira: Please, everyone stay calm! Whatever you do, do not look them in the eye!
Alexis: Okay, you're making them angrier!
Moira: I'm not, Alexis! I know a bit of their language. CAW! CAW-CAW!
David: This is fucked.

Quote from Moira in Maid of Honour

[the trailer plays:]
Moira: Well, we best be returning to the lab, Nathaniel. It's getting [caws] dark.
Nathaniel: But it's the middle of the afternoon, must be a solar eclipse.
Moira: That's not an eclipse, Nathaniel! Those are birds! [cawing] Ahhh! And so... [caws] what have we done?!
Male voice: "The Crows Have Eyes: The Crowening."

Quote from Alexis in The Wingman

Alexis: [phone rings] Oh! It's Buzzfeed calling about the 10 goriest Clara Mandrake accidents from the film.
Moira: Best we take it.