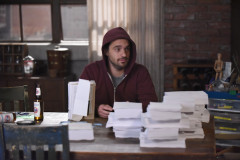 Julius Pepperwood was Nick's ex-cop alter ego who later became the lead character in his book series, "The Pepperwood Chronicles".

Nick: I'm using magnetic words to break through my writer's block, and it's not working. I've already folded all my shirts and masturbated six times, and I'm running out of things to do. I'm just in a real bind. You see, The Pepperwood Chronicles sold over 30 copies, Jess.
Jess: So, what, we're complaining about good things now?
Nick: It's just, my audience is gonna be clamoring for a sequel, and I can't leave those stevedores, those-those tugboat workers, those lighthouse keepers empty-handed.
Jess: You think that your audience is entirely made of, like...
Nick: Blue-collar nautical workers on the coastline of Maine. I don't think that, Jess, I know that.

Nick: Don't mean to interrupt, I just hear you're the best teacher of adults?
Jess: Oh, no.
Nick: I wonder if there's room for one more?
Jess: No!
Nick: How you guys doing? I'm Julius Pepperwood.
Jess: Not now, okay?
Nick: I'm an ex-cop, ex-Marine. I'm here to learn how to write short fiction.
Jess: Oh, okay, Julius, just... take a seat and, um, keep small.
Nick: I'm from Chicago. Thin-crust pizza? No, thank you. I'm from Chicago.

Nick: What happened to you?
Schmidt: The Pepperwood Chronicles, that's what happened to me.
Nick: So it's really that bad.
Schmidt: Nick. This book... is magnificent.
Nick: What?
Schmidt: Julius Pepperwood? A hard-boiled Chicago cop turned New Orleans detective, racing around on fan-boats, drowning that two-faced DA in a bucket of jambalaya.
Nick: Yeah. Right in the jambalaya.
Schmidt: Finding John F. Kennedy... alive?
Nick: That wasn't too far?
Schmidt: It's a masterpiece, Nick.

Correct this quote
View more quotes from Single and Sufficient

Nick: [on the phone] What about this dumb thing? When Pepperwood just watches a block of local news.
Schmidt: Oh, I found that part to be gutting, Nick. I mean, the irony that Pepperwood's violent world is being translated into sound bites for mass consumption...
Nick: That's just me transcribing Channel 3 News! I didn't even change the anchors' names!
Schmidt: It's called realism, Nick.
Nick: No.
Schmidt: Good-bye, genius.

Nick: Well, Schmidty, you pulled a real Mr. Miyagi on the whole "no notes, tough love" routine.
Schmidt: Let me see it. Ooh! Nick, there's a whole nother chapter here! How did you make this happen?
Nick: I worked... because of you.
Schmidt: And... who is this wise, denim-clad Jewish chaplain? Sch-Schmith?
Nick: That was the big thing. You helped me realize that Pepperwood needed a Schmith.
Schmidt: Okay. While it's an honor to be included in the world that you've created here, um... [sighs] the Schmith character seems, uh, grotesque.
Nick: Yeah, he's unlikeable.
Schmidt: I don't understand why, when we meet this character, he-he's kicking a puppy.
Nick: He's the bad guy... in Pepperwood's life. He's mean, he's... He's not somebody you want to introduce to Mom and Dad.
Schmidt: The cha... the character.
Nick: Schmith is a dirt bag. I have no respect for Schmith, and neither should anybody else.
Schmidt: I think that's a mistake to say those things about the character.
Nick: I appreciate what you're saying, but I'm happy with what I have. I don't need any notes.
Schmidt: Oh, now it's no notes?! Nick? Nick?!

Jess: "Julius Pepperwood: Zombie Detective"?
Nick: All his murder victims are already dead, so they obviously don't need a detective. I'm working on it.
Jess: "The night was inky hot."
Nick: Don't do this.
Jess: "She strode into his office with a sense of purpose, place, another word here, question mark."
Nick: I'm looking for another "P" word there.
Jess: "She had zombie legs that went on for miles. They were the kind of legs you could sink your teeth into. Pepperwood had two friends ... one, if you count his hat. The other was his gal Friday, Jessica Night."
Nick: It's not you, Jess.
Jess: "She was small in stature, but not in spunk. And a super annoying know-it-all."

Quote from Nick in Jeff Day

Nick: Oh, Jessica. You understand that fate fused that kid's toes together. And Dr. Sam is the man for that job, but I'm the man for this job. So if you excuse me, let me get my Julius Pepperwood disguise.
Jess: Wait, no, no, no. You don't understand. I just need you to pretend to be Jeff Day.
Nick: Well, I need some sort of disguise.
Jess: Absolutely not.
Nick: What about a mustache?
Jess: That's a disguise.
Nick: Not if I grow one.
Jess: We're in the car in ten minutes. You gonna grow a mustache in ten minutes?
Nick: No man could do that.
Jess: Scientifically impossible.
Nick: Hey, I guess science always wins, right? See ya in the car.

Quote from Nick in The Cubicle

Nick: So please don't feel any pressure to like it, even though I spent 7,000 hours writing it. So without further ado, or as Pepperwood would say, "Ah-don't." You'll get that when you read it. Here it is.

Correct this quote
View more quotes from The Cubicle

Quote from Nick in The Cubicle

Nick: Would it help if I read some of it out loud? Just so you get the New Orleans flavor?
Reagan: I think it will.
Nick: [Cajun accent] "Julius Pepperwood loved three things in his life... his gumbo... his sex... and more of that sweet gumbo. [chuckles] Her legs were as long as the deep..." [Reagan snores] You have got to be kidding me!
Reagan: Just kidding.

Jess: Please? You-you might get some ideas from your audience.
Nick: My audience is the men who built this great country. Your students would never understand that Pepperwood's just a New Orleans story about a guy fighting with the alligator within.

Nick: Guys! Pepperwood's about way more than just a romance. It's... it's, uh, it's about life, you know? Race. The sexualization of the American handgun.
Jess: [whispers] Keep it clean.
Nick: Okay. It's a story about his ambiguous relationship with... with justice.
Gertie: But the romance is amazing. It made me realize it doesn't matter if I'm straight or gay; I'm just me.
Nick: You got that from my book? That's-- yeah. That was positive. Do you think that's because of the gay dog character?
Gertie: Yeah.
Nick: What I really respect about that is it's never mentioned that he's a gay dog. But you got that from the writing. And that's pretty dope.

Jess: Nick, I have to get to school!
Nick: I know. So do I. I can't wait to pitch those girls my Pepperwood prequel. It opens with a very graphic description of his birth. It's like a dark Look Who's Talking.