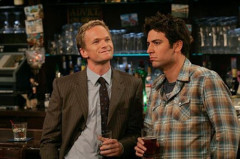 Have you met... is a line the gang use to start conversations with potential mates for their friends. It's most commonly used by wingman Barney to introduce Ted to women.

Quote from Barney in Purple Giraffe

Barney: Exactly! Ted, let's wrap. Statistic: at every New York party there's always a girl who has no idea whose party she's at. She knows no one you know, and you will never see her again. Do you see... where I'm going... hu-with this?
Ted: Barney, I don't wanna say.
Barney: Argh! Scoping, beep, scoping, beep!
Lily: Man you're a dork.
Barney: Beep, beep, beep, beep. Target acquired! And now it's time we play a little game I like to call "Have You Met Ted?"
Ted: No, come on not this.
Barney: [taps woman] Hi! Have you met Ted?

Quote from Barney in Sunrise

Justin: I don't care how well-dressed I am. The real challenge is walking up to a girl that I've never met before and somehow talking to her with words from my mouth. I've looked at it from every possible angle. There's just no way to do it.
[Barney and Tim Gunn chuckle]
Barney: What's your name?
Justin: Justin.
[later:]
Barney: Have you met Justin?
Julie: Uh, no. Hi, I'm Julie.
Justin: So simple, so elegant.
Kyle: That's it? You just walk up to someone you don't know and introduce them to your buddy? I don't know. That sounds kind of...
Justin: Have you met Kyle?
Woman: Hi, Kyle.
Kyle: Are you Jesus?!

Quote from Barney in Farhampton

Barney: I'm sorry I lied to you. I'll tell you everything. The whole story.
Quinn: Fine. You have one minute before I walk out that door.
Barney: Um, it's, uh, kind of a long story, Quinn. Gonna take a bit little longer than a minute.
Quinn: 52 seconds.
Barney: Seven years ago, when Marshall and Lily got engaged, Ted saw Robin across a crowded room, and I said, "Oh, yeah, you just know she likes it dirty," but Ted really liked her so we played "Have you met Ted?" They went to dinner, he walked her home, shoulda kissed her, didn't - lame - so he stole a smurf pen1s, went back to her place, should've kissed her, didn't. Lame. He threw three parties, they kissed on the roof, but decided to be friends - lame - then Ted wanted to take Robin to a wedding, she couldn't go, he went alone and met Victoria, didn't kiss her either - lame - not a great closer, Ted. But he finally kissed her, they started dating, she went to Germany, Ted kissed Robin, lost Victoria, Ted did a rain dance, got Robin, Ted and Robin broke up, Robin moved to Brazil, came back with a Latin stud, Ted got jealous, got a tramp stamp, not really relevant to the story I just like mentioning that as much as possible. I hooked up with Robin, Ted and I stopped being friends, Ted got hit by a bus, we made up... [intake of breath] Robin and I started dating, I got fat, her hair fell out. We broke up, Robin dated Don, I dated Nora, cheated on her with Robin, I dumped Nora, Robin dated Kevin, but not for long, and then I met you and you took my grandpa's watch but I fell in love with you anyway, and you let me fart in front of you and I asked you to marry me and you said yes and we came over here to meet little Marvin and that's everything! Also I went on The Price Is Right and won a dune buggy.
Quinn: Goodbye, Barney.

Quote from James in Single Stamina

Future Ted: [v.o.] Yeah, Barney and James together was a lethal combination. Since there was never any crossover in targets, James was always there for Barney with the assist.
[flashback to James and Barney at MacLaren's]:
James: [to a woman] Whoa. Your scarf... it is fierce!
Woman: Thanks. H&M.
James: What? I would never know, 'cause it is so hot that my eyes are melting. Oh, I can't see. Hey! You know, speaking of things that would look good wrapped around you, have you met my straight brother, Barney? Oh, he is fab...don't you go nowhere...ulous. Okay?

Quote from Barney in Single Stamina

Future Ted: [v.o.] Kids, there's nothing more wonderful than New York City in the winter... except the view of New York City in the winter through your apartment window. In the winter of 2006, Marshall, Lily, Robin and I were all deep in couple hibernation mode. Sadly, this left Uncle Barney out in the cold.
Barney: [enters] Okay. All-night rave, abandoned tire factory in Newark. We're on the list. Who's in?
Ted: Nope.
Robin: No.
[later:]
Barney: Private jet. Teeterboro Airport, skinny-skydiving. Who's in?
Ted: Nope.
Lily: No, thanks.
[later:]
Barney: One beer. Bar, downstairs, 15 second walk. Who's in?
Marshall: Shh. Lily went sleepy-bye.
[later at MacLaren's:]
Future Ted: It got so bad, Barney tried to be his own wingman.
Barney: [to a woman] Hi. Have you met me?

Barney: And as your best friend, I suggest we play a little game I like to call... "Have you met Ted?"
Ted: Wait. No, no, no. We're not playing "Have You Met Ted?"
Barney: [taps a woman on the shoulder] Hi, have you met Ted? [moves away]
Ted: [to Yasmine] Hi, I'm Ted.
Ted: It's a very pretty name.
Yasmine: Thanks, It's Lebanese.

[flashback to September 2005:]
Robin: So? No. No. You-You were in. I said, "Have you met Ted" and everything. How could that not work?
Ted: I don't know, we introduced ourselves, I bought her a drink, told her I loved her...
Robin: What?
Ted: I'm kidding.
Barney: Hold on, Roxanne, if that really is your name.
Robin: It's not. It's Robin.
Barney: You played "Have You Met Ted" without me? In my bar with my Ted? Maybe stealing a bro's wingman is okay back in... I'm sorry, what's the name of this third world banana republic you claim to be from?
Robin: Canada.
Barney: I have literally never heard of that place.

Quote from The Mother in Platonish

[flashback:]
Barney: I'm recruiting volunteers for the Starving Puppy Orphanage where I work. For free. So if you wouldn't mind just writing your number down on this sign-up sheet...
The Mother: Listen. I appreciate that you feel like you need my number. Um, maybe it's because you're really sad about something and this is your way of feeling better about yourself. But since I have a boyfriend, and I'm pretty sure I heard you call me a target earlier over there, I'm gonna go ahead and not give you my number. I'm gonna give you something even better.
Barney: Wow. Right to the chase. Meet you in Aisle 6.
The Mother: I'm gonna give you this. It's gonna be okay. You're a good guy. You will get through this.
Barney: Uh, okay, weirdo alert. [to another woman] Have you met...? Excuse me. [to the mother] What do you mean, "sad"?

Quote from Lily in Knight Vision

Reverend: I understand the temptation. They're such a sweet couple. I mean, the way they call each other Barnmallow and Robinpad.
Lily: Yes, I do steal their stories. But only because my husband and I are so ashamed of how we met. [v.o.] See, we only met because his friend Ted fell in love with me. And who could blame him?
[fantasy:]
Ted: Hey, Marshall, see that girl?
Marshall: Oh, yeah. You just know she likes it dirty. Go say hi.
Ted: Well, I can't go say hi. I need a plan. I'm gonna wait till she goes to the bathroom.
Marshall: Hi. Have you met Ted?
Ted: Hi.
Marshall: I'm sorry, I can't... [kisses Lily]
[reality:]
Lily: And now, after years of lying, cheating, and back-sliding, here we are, married. But what can I say? My husband's a sociopath who's slept with over a hundred women, and I'm a slut who once let my boss feel me up.
Barney: Oh, come on, it is over 250 women.
Robin: I felt him up!

How I Met Your Mother Collections