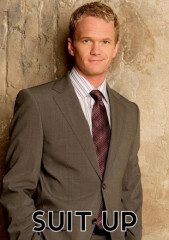 Suit up is Barney's catchphrase to implore his friends to step up their sartorial game to match his.

Quote from Barney in Drumroll, Please

Barney: Ted, oh my gosh, I love this moment. You know why? Because I'm gonna say it and this time you're actually gonna say yes. You ready? You ready to say yes? Ted, suit up!
Ted: Yes! No.
Barney: Oh, come on!

Barney: [enters, on the phone] Seriously, that's the last time I'm gonna call you today. Okay. Good-bye. You didn't hang up either! I know! You hang up! You hang up! My bookie. Great guy.
Ted: So let me get this straight. A funeral is the one time you don't suit up?
Barney: Have I taught you nothing, Ted?
Ted: Virtually.
Barney: Suits are full of joy. They're the sartorial equivalent of a baby's smile.
Ted: "Sartorial"?
Barney: "Of or pertaining to tailors or their trade." Suits are for the living. That's why when it's my time to R.I.P. I'm going out of this world the same way I came into it buck naked. Yeah. It's gonna be awesome. Open bar for the guys, open casket for the ladies. What up?!
[Barney holds his hand up for a high-five. A giggling Marshall is the only one to accept]

Quote from Barney in Girls Vs. Suits

Barney: [singing] I know what you're thinking What's Barney been drinking? That girl was smoking hot Yes, I could've nailed her But no, it's not a failure 'Cause there's one thing she is not To score a ten would be just fine
But I'd rather be dressed to the nines It's a truth you can't refute Nothing suits me like a suit!
Picture a world Where all the boys and girls Are impeccably well-dressed That delivery guy in a jacket and tie That puppy in a double-breast That '80s dude with muttonchops That baby with a lollipop That lady cop who's kind of cute Nothing suits them like a suit
Choir: Suits
Barney: A wingman I can wear
Choir: Suits
Barney: They're oh, so debonair
Choir: Suits
Barney: The perfect way to snare A girl with daddy issues
Choir: Suits
Barney: In navy blue or black Check out this perfect rack I want to give them a squeeze
Marshall: Oh, really? Then answer these questions if you please [Irish accent] What would you do if you had to choose Between your suits and a pot of gold?
Barney: Suits
Ted: What would you say if you gave your suits away And in return you'd never grow old?
Barney: Suits
Robin: What would you pick? One million chicks Or a single three-piece suit?
Barney: It's moot
Lily: What if world peace Were within your reach?
Barney: [talking] I'm gonna stop you right there. It's suits. Come on, Lily, get your head out of your ass.
Barney: Two, three, four [singing] Girls will go and girls will come But there's only one absolute Every bro on the go needs to know That there's no accepted substitute I'm sorry, suits, let's make amends My Sunday best are my best friends Send casual Friday down the laundry chute 'Cause nothing suits the undisputed Oft-saluted suitor of repute Like... A... Wait for it... Suit
Choir: Nothing suits him Like a suit Suit Up! Suit Up! Suit Up! Suit Up!
Barney: [talking] Then again, she is pretty hot.

Quote from Barney in Atlantic City

Quote from Barney in Single Stamina

James: Barney, family talk. Okay, dude, you have got to stop this, okay? I know that my getting married is threatening to your way of life...
Barney: Oh, so now it's my way of life? I thought it was our way of life. You've completely turned your back on it. Look at you, not even suited up. Do you remember why we suit up, James?
James: To get laid.
Barney: To show people that we are different from the millions of T-shirt and jeans lemmings out there. The suit shows that we are a force to be reckoned with, a two-person army that plays by its own rules. But you've taken off the uniform, you've crossed enemy lines, and you've abandoned me. Well, I'm not gonna let you do that.

Quote from Barney in Vesuvius

Ted: Hey.
Barney: Where's your suit!? Just once when I say suit up, I wish you'd put on a suit.
Ted: I did that one time.
Barney: It was a blazer!

Quote from Barney in Sweet Taste of Liberty

Ted: Why do you have those suitcases, and who are we picking up?
Barney: I don't know. Maybe her? Or her.
Ted: Wait, so when you said you were going to "Pick someone up at the airport". You meant you were going to "pick someone up" at the airport.
Barney: [winks] Scenario. Couple of girls fly into town, looking for a fun weekend in NYC when they meet two handsome international business men just back from a lucrative trip to Japan. Sample dialogue, "You have a wheelie bag? Wh- I have a wheelie bag!"
Ted: You've gotta be kidding me.
Barney: False. Sidebar, tuck in your shirt. You look sketchy.
Ted: I'm sketchy?
Barney: Trust me, it's going to be legendary.
Ted: Don't say "legendary", okay? You're too liberal with the word legendary.
[flashback:]
Barney: We're building an igloo in Central Park. It's gonna be legendary. Snow suit up!

Quote from Barney in Third Wheel

Marshall: Why would you do that to yourself?
Barney: Because you get up in your head, man. Start thinking, I can't do this. It's two women. That's two of everything, four of some things. The logistics alone are enough to cripple even a pro like me.
Ted: See? If a complete degenerate like Barney choked, what chance do I have?
Barney: The best chance in the world. Fear took the belt from me. Fear rode the tricycle that night, my friends. But fear will not get a second turn.
Ted: It won't?
Barney: No, because I now realize it isn't my destiny to win the belt. It is my destiny to help my friend win it. Ted is fated to go there first. He is our Neil Armstrong. [laughs] Space-suit-up, Ted, 'cause you're going to the moon.

Barney: [answers phone] Hey loser, how's not playing laser tag? Because playing laser tag is awesome! Oh, I killed you Connor; don't make me get your mom!
Ted: Hey, listen. I need your opinion on something.
Barney: Okay, meet me at the bar in fifteen minutes, and suit up!
[cut to:]
Ted: So these guys think I chickened out. What do you think?
Barney: I can't believe you're still not wearing a suit!

Quote from Barney in Game Night

[flashback:]
Barney: Shannon! Shannon, you came back!
Shannon: I'm just picking up my last paycheck.
Barney: Oh. Did you... did you get my tape?
Business man: Oh, she got the tape.
Barney: You? It was you?
Business man: Oh, man.
[A crying Barney runs out of the coffee shop. Out on the street, a man hands him a flyer which reads "Suit Up!" Barney cuts his ponytail, shaves his goatee and suits up]

Quote from Barney in The Scorpion and the Toad

Barney: Marshall Eriksen, suit up!
Marshall: No way.
Barney: Yeah you're good in that. Let's go.

Barney: [answering phone] Hey, so you know how I've always had a thing for half-Asian girls? Well, now I've got a new favorite: Lebanese girls! Lebanese girls are the new half-Asians.
Ted: Hey, you wanna do something tonight?
Barney: Okay, meet me at the bar in fifteen minutes, and Suit up!

Lily: Oh, I think we made the right decision going for the custom-made Italian sheets.
Barney: Hey, if my bed's going to suit up, it's going to do it right. Want to give it a whirl?

Barney: You're going as my wing-man. Flight suit up!
Ted: No thanks. I'm sticking with the hanging chad.
Barney: Oh you're dangerous, Maverick. Your ego's writing check your body can't cash. OK. Here's the plan, and I crap you not. I'm getting us into the Victoria's Secret Halloween party. Trust me, by the end of the night, your chad will not be hanging.

Quote from Ted in Wait For It...

[At Marshall and Lily's wedding in 2007:]
Ted: I don't know. Robin and I broke up two weeks ago. I'm... I'm not ready.
Barney: When will you be ready?
Future Ted: [v.o.] It was a good question. After a big relationship ends, you need some time to recuperate. Robin took a trip to Argentina, and I went through my usual routine. I grew my breakup beard.
[Ted is in his bathroom as Barney bursts in:]
Barney: Ted Mosby, suit up, 'cause here's the plan. There's a Miss Nassau County pageant. We'll pretend to be judges and, yes, our votes are for sale.
Ted: I'm not ready.
[Ted paints a wall as Barney bursts in:]
Future Ted: I repainted the apartment.
Barney: Finish line of a woman 10K. Salty girls on an endorphin high who just want to lie down. Yeah.
Ted: I'm not ready.
[The gang, minus Robin, are MacLaren's:]
Future Ted: And the truth is, I was doing really good.
Barney: Female acrobats from Montreal. Super flexible. We're going to get "Cirque de So-Laid". What up?
Ted: Barney, come on, we've covered this. I'm not-
Lily: Robin!
Robin: Hey, guys. I just got in last night. Um, uh, this is Gael.
Gael: Hola.
Ted: Okay, I'm ready.

More How I Met Your Mother Collections