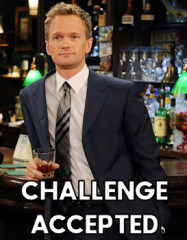 All the times Barney Stinson accepted a ridiculous challenge, usually one which he himself proposed.

Quote from Barney in The Window

Barney: No one... I mean no one... could get laid wearing these. [laughs] Challenge accepted. I, Barney Stinson, being of sound mind and amazing body, will wear these overalls until I have sex with a woman. [runs off]
Robin: I actually dated that guy.

Quote from Barney in Baby Talk

Quote from Barney in No Pressure

Quote from Robin in Platonish

[flashback:]
Barney: Seriously, guys, you're gonna have to try harder than that.
Robin: Challenge accepted.
[later, at MacLaren's:]
Robin: Excuse me, hi. I'm Ryan Gosling's personal assistant. He saw you as you were walking in, and he sent me over to tell you to wait here. Be cool. This is real. Okay? But listen. Ryan is super shy. I know. Heh-heh. Which means if he comes in here and sees you talking to some other guy, he's gonna turn right around and leave. Nod if you understand.
[back at the apartment:]
Robin: Redhead at the bar.
Barney: Challenge accepted!
[later at MacLaren's:]
Barney: Hey there.
Woman: Get away from me!

Quote from Robin in The Window

Robin: Okay, not that I care about this challenge, but it's cheating to wear overalls over a suit.
Barney: No, it's not. They're not called over T-shirts, Robin. They're not called over shirtless fat guys who used to come fix my mom's car and then hang out with her upstairs for a little while. No! They're called overalls, okay? And I can wear them over whatever I want.
Barney: [to a passing woman] Hey.
Robin: Oh, he's not saying hello. He's just telling you what he feeds his horsies. Oh, man, I can sit here and make
you-look-like-a-farmer jokes all night. Challenge accepted.

Quote from Barney in Daisy

Ted: Why was Lily getting into the Captain's car at 3 in the morning?
Barney: Guys, I hate to even say this, but do you think it's possible that I could eat six of these saltines in under a minute? Challenge accepted.

Quote from Barney in Platonish

[flashback:]
Robin: I'm sorry, I missed the first half of this. Why is picking up a drunk chick sitting alone and rubbing a tan line on her finger where a wedding ring used to be a challenge?
Barney: Because I said, "Challenge accepted." Pfft.
Lily: See, that's your problem, Barney. You only accept challenges you came up with. Just once, I'd like to see you accept someone else's challenge.
Barney: Challenge accep... Wait, what's the challenge?
Robin: Interesting. An opportunity rife with possibilities. We need to find something with just the right amount of poetic...
Lily: Get a girl's number while talking like a dolphin.
Robin: That works.
Barney: [imitates dolphin: "Challenge Accepted"]

Quote from Barney in Platonish

[flashback:]
Barney: Please, Ted and Robin are not platonic. Just like me and Robin are not platonic. Just like no two single people in the world are ever platonic. Symposium. Two people are only platonic if in the next 20 minutes, there is no chance of them hooking up. Truth is, I only know of one genuinely platonic relationship.
Lily: You and me.
Barney: Don't make me laugh, Lily. You want to hit this so hard. Seriously, she's playing footsies with me as l... Ow! No, I'm talking about Marshall and Robin. [v.o.] Marshall and Robin wouldn't hook up even if this happened.
[fantasy, Lily runs into MacLaren's with a bomb strapped to her chest as Marshall and Robin talk:]
Lily: Marshall! Robin! If you guys don't full-on make out in the next 20 minutes, they're gonna blow me up and everyone in this bar!
Marshall: Oh, God, no. Anyone but Robin.
Robin: I really don't want to do this.
Lily: Guys, we have no time. Just do it!
[19 minutes later:]
Marshall: I'm sorry, baby. I just... I can't do it.
Lily: Aw...
[back:]
Barney: And the only survivor was me, because I was upstairs banging Ted's mom. What? Get that blond girl's phone number? Challenge accepted.

[October 2016:]
Barney: Speaking of splits, do you think I can do a split in midair like my boy David Lee Roth?
Marshall: I know you can't.
Barney: Challenge accepted.
[later:]
Barney: [o.s.] Oh, my scrotum!

Quote from Barney in Something New

Robin: So, what are we gonna do? Put something in their food, key their car? Ooh, do either of those cigars explode?
Barney: Hold on, Wile E. Coyote, I think I got something. He's checking out the hostess. Now, a guy who's happily in a relationship sees a girl like that, he'll check her out maybe 14, 15 times, tops. 16 times, tops.
Robin: So Krirsten's more invested in the relationship than her fella is. That could spell trouble.
Barney: Challenge accepted.
Robin: Hey, do you think it's bad luck for a bride to break up two strangers a week before her wedding?
Barney: I'd say it's very bad luck... for Krirsten. [Barney and Robin laugh maniacally] Ow, I hate this table so much!

How I Met Your Mother Collections